BEYOND MY WORLD is a motto that summarizes and unifies this year’s edition of the Festival and is reflected in its main programme section.

We would like to present the identification of the Oscar-qualifying® 13th International Animated Film Festival ANIMATOR.

Let us remind you that the trailer for the Oscar-qualifying® 13th International Animated Film Festival ANIMATOR was created by the Polish animation artist Paulina Ziółkowska, a graduate of the Lodz Film School (PWSFTviT), author of such films as „O Matko!” (2017) and "Na zdrowie!" (2018). Currently, Paulina Ziółkowska is studying and continuing her artistic work in Berlin.

The music for the ANIMATOR 2020 trailer was composed by Adam Brzozowski, a Poznań-based multi-instrumentalist, composer, co-founder and long-term member of the Snowman formation.

The unique and very characteristic visual identification of this year’s Festival edition was prepared by the Poznań graphic artist Bartosz Buszkiewicz, who based his work on the animation by Paulina Ziółkowska. In the series of posters we have attempted to recreate the story from the trailer, highlighting the outstanding characters with whom viewers are going to acquaint themselves during the festival screenings of ANIMATOR 2020. This is an invitation to enter the unique, unconventional world of animated film. 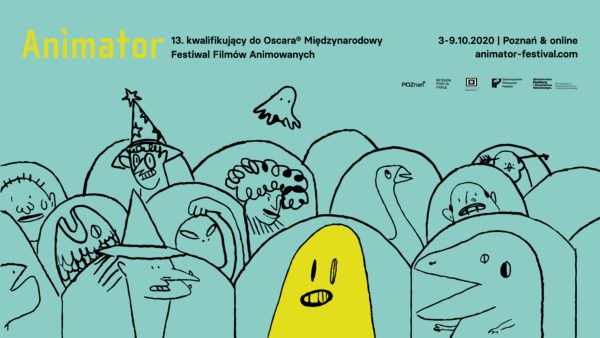 BEYOND MY WORLD is a motto that summarizes and unifies this year’s edition of the Festival and is reflected in its main programme section.

„We wish to encourage our viewers to reflect on what would happen if we could transcend our own personal point of view, go beyond our individual mindset, our established ways of seeing and comprehending the world, the tangible reality of here and now. What would we discover if we could see our everyday rituals and habits from an entirely different perspective? The motto BEYOND MY WORLD is an encouragement to reach beyond one’s worldview, perspective, values, faith, manner of seeing and understanding the world. The inability to attain such transcendence is, in our opinion, the major cause of human ignorance in relations with ourselves and with nature, and the main trigger of armed conflicts, crises and revolutions”, comments the ANIMATOR programmer Filip Kozłowski.

Within the framework of this section, films will be screened that tackle the subject of global conflicts, particularly the Israeli-Palestinian one. The climatic crisis issue will also be addressed.

From the very beginning of its history, one of the Festival’s key events is the International Competition of Animated Films. On the one hand, the Competition gives our audience the opportunity to get acquainted with a panorama of the latest productions from around the globe (with approx. 60 titles, both feature films and short films, selected from over a thousand submitted for selection); on the other hand, it is an opportunity for artists - both debuting and well-established - to present their work to our festival audience.

This year’s short film competition will feature 47 films divided into 6 thematic screenings, among them: Towards childhood, Life as a terminal disease, Film is a dream, Crouching evil, hidden truth.

Stay tuned for the news about the selection of feature films.

The programme also includes animated films from the WOMEN’S VOICES series, as well as animated series for children and the ANIMATOR FOR KIDS section. We are also going to present to you a thematic bloc of animations actively involving viewers (interactive animations) and animated productions based on the engines and graphic and technological environment of computer games ANIMACJA INTERAKCJA. VIDEO GAMES.

A detailed programme of the 13th International Animated Film Festival ANIMATOR will be published in the first half of September.

This year, for the first time in its history, the Festival will have a hybrid formula combining traditional screenings at the Muza Cinema with online presentations.

More information will be available soon!